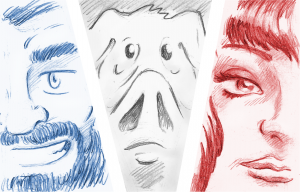 If you are studying German, you surely already know that words can have one of three genders: male, female and neuter, which correspond to the determinative articles “der, die, das”.

GREAT NEWS! There is a new game to learn Der Die Das, HAVING FUN!

The three genders, pose a big challenge for foreigners, especially for those who don’t have genders in their mother tongue. For example in English “sun” and “moon” don’t differ in gender and both take the article “the”: the sun and the moon.

But even for those who already know and can use the gender-differentiation in their native tongue, the German tripartition creates the enormous problem of remembering which gender corresponds to which noun.

There are some rules to guess the gender of some nouns and you will easly find those on the internet, but they only cover a small part of the vocabulary you are going to learn. What to do with the remaining majority of nouns?

The most classical approach is “to memorize the article together with the noun”. But this trick has its own limits because it is based on acoustic memory and can only be trained by rote learning.

The second most classical advance is one of the possible variations of the “method of loci” (as old as Cicero), which consists of relating a gender to a place or color and then using it to mark the nouns (for example, all male nouns are blue or are placed in an imaginary dining room).

Last year (2016) I was confronted with the challenge of studying Japanese, which required me to learn a great amount of complex symbols and to relate them directly to meaning. This turned out to be a highly frustrating and extremely slow task as long as I tried with rote learning and standard mnemotechiques.

I was lucky enough to find a book, which used a completely different mnemonic approach and allowed me to easly remember some 300 symbols a month. As a language tutor I immediately asked myself if and how my students could profit from the same technique… and here we are.

I called this method “The Technique of the Three Tribes” (in short: TTT).

I will now give you a practical example of the method, so please follow all the steps and try yourself. At the end of this article I will tell you more about how and why it works so efficiently.

First step: imagine a planet called Germanyland, where everything looks like a cartoon from the 70s and where every noun, person or concept belongs to one of three tribes, namely: the Males, the Females or the Neuters.

The fact of belonging to the same tribe causes the objects in question to show up in the same stories and picture, while objects of different tribes will have only rare and conflictual encounters.

To make the method work we have to build a “core” for each of the tribes, i.e. a first circle of components, of which we know for sure that they belong to the same tribe. I am now going to build these first circles, starting with the Male tribe, and I will use common words that you probably already know. Of course, you can also add your own as soon as you understood how it works.

When you think about Germanyland and its inhabitants, it’s important that you vividly picture a detailed scene. I can’t show you the content of my head, therefore I draw actual pictures. You don’t need to draw – I usually don’t do it for myself – it is sufficient to imagine the scene in your head! At the center of the picture we notice the boss of this tribe: a man (Mann) of course! He’s sitting at the table (Tisch) and obviously on a chair (Stuhl). Who is his best friend? A dog (Hund)! Why does the man have a hat (Hut)? Maybe because of the wind (Wind) or maybe because he doesn’t want worms (Wurm) to fall on his head. In fact, he is sitting under a tree (Baum) and on its branches (Ast) there are birds (Vogel) which could let worms fall down.

What stories can we use to connect further elements? Invent your own reasons why death (Tod) is waiting behind the tree with a letter (Brief) in his hand, or why this guy has an apple (Apfel) but only a spoon (Löffel) to eat it.What is the cheese (Käse) on a plate (Teller) doing there? How did the table break so that it needs a rock (Stein) to stay upright? Why does he have one bare foot (Fuß) even though he possesses two shoes (Schuhe)? Have you noticed that there are only moon (Mond) and stars (Stern) in the sky? And where does that butterfly-key (Schmetterling, Schlüssel) come from?

An advice: The more absurd, funny and even kinky your stories are, the better you will remember them. For example: It will be easier to remember “finger” (Finger) if you imagine the man showing a middle finger instead of his first finger.

And now let’s do the same game but with some female nouns.

The boss here is the woman (Frau) and her best friend: the cat (Katze). She wears glasses (Brille) to read the newspaper (Zeitung) but can’t focus because a flower (Blume) with a big nose (Nase) is cutting her strand (Strähne) with scissors (Schere).

I am sure you are capable of continuing on your own, so here the list of words for this picture: sun (Sonne), door (Tür), watch (Uhr), cloud (Wolke), hand (Hand), strawberry (Erdbeere), cup (Tasse), bottle (Flasche), milk (Milch), banana (Banane), meadow (Wiese), snail (Schnecke). And here we are at the last tribe: the neuter one.

You can choose the boss to be either the child (Kind) or the pig (Schwein) and make the other his loyal companion. Because you already know how the game works, I give you directly the list of words. Please share your best stories in the comments, so that they can inspire us.

Another advice: Don’t be too hasty by creating stories and picturing them in your mind, because the quality of the stories and the level of detail you use will determine how good and for how long they will stick in your mind. It is worth to invest 10 more seconds for every word and then be sure to never forget its gender again.

Congrats! You created the first three “cores”, which you can now use to add a potentially infinite number of words.

The way you add a new word is quite easy: you only need to create a story which will connect the new word to at least four more words of the same tribe.

For example: I want to add “fork” (Gabel), how will I proceed? I will think about Ariel, the siren, who used a fork to curl her strands, and here we are: the cat (Katze) has read in the newspaper (Zeitung) about Ariel and now uses the fork (Gabel) to curl the woman’s (Frau) strands (Strähne).

Why don’t you try it yourself? You could, for example, add “knife” (Messer) to the neuter tribe.

Why and how it works

If you followed the instructions step by step and vividly pictured every story in your mind, then now it will be easy to answer this question: To which tribe does the star (Stern) belong? And the fire (Feuer)? And the patch (Pflaster)? And the nose (Nase)?

Consider that you just learned the gender of 70 words! Now that you know how it works, it won’t take more than 10 seconds to connect a new word to a tribe. This means you can memorize the gender of 360 words in only one hour and be sure that you will remember them.

How does this technique work and why is it so effective? It simply uses two highly efficient principles:
1) The power of narrative. Human brains have a huge talent for remembering stories, especially strange ones.
2) Networking. You remember best what is connected the most. Single chunks of knowledge or single relationships are more likely to be forgotten than bundles of connections.

The networking form gives us two more advantages:
1) Every time we add or recall a word, we automatically recall other ties and therefore review them. In other words: When you added “fork” you also reviewed the fact that cat, woman, strand and newspaper are tied together and therefore female.
2) because of the many connection every new word has with many known words, the probability to find a connection that will remind you to which tribe that word belongs is really high.

And of course: if you need a Tutor to help you learn German, contact me.

One thought on “Remeber the Genders: the Three Tribes Technique”